The room is upbeat, friendly.

About two dozen people, mostly women, filter in to a lecture space at DeVry University in King of Prussia, Pa. But these aren’t students. Their combined expertise could probably run a multi-billion dollar drug company.

“We have CEOs, we have MDs, PhDs, we have sales and marketing, we have nurses. We have research scientists, I mean, you name it we have it,” says Lisa Coccia, co-chair of this group.

Coccia and others are here because they’re in some way out of work, or in transition. Coccia, who has more than 20 years of sales and marketing experience under her belt, got involved with the group this past winter.

“Everybody would say to me ‘oh you know, don’t’ worry about it, you’ll get a job tomorrow. You’re so talented with all your skills, no worries,’” says Coccia. “And I’m finding it to be the exact opposite.”

The Philadelphia region – spanning Pennsylvania, Delaware and New Jersey – is a hub for the pharmaceutical industry, but the path toward new drugs is changing. With that, many of the major companies that have a strong foothold in the region are consolidating, downsizing.

The changes have meant thousands of smart people are without the security and community once associated with the sector. They’re trying to figure out next steps amid a complex landscape filled with challenges and in some instances, unforeseen opportunities.

The midday meetings at DeVry are informal, business casual. Most attendees, however, don’t want to put their name on record for this story. As big as the life sciences and pharmaceutical sector may seem, they say, it is actually a very, very small world.

“I may be blacklisted from the industry, and I don’t want that,” one woman says.

Beneath the smiles and chatter, people reveal a mix of experiences and emotions. For some, there’s the disbelief of an unexpected lab closure, the frustration of having lots of experience but no luck landing interviews in an increasingly competitive market. For others, there’s the shear stress about the next mortgage payment, utility bill or child’s college tuition fee.

Coccia is the current co-chair of this biweekly group. Its motto: women helping women (though they recently opened it up to men because of the strong interest). A guest speaker, John Brady, steps to the front after introductions. He’s a career coach the group invited in to give advice.

Brady pulls up a power point, walks back and forth with ease while talking about working through that initial trauma of a job loss, finding more success in the search for new opportunities, reassessing skill sets and career goals, becoming a savvier networker.

At one point, Brady cues up Rocky Balboa for a bit of inspiration.

Afterwards, Coccia says she found the session to be helpful, especially in getting her to think about positions she hadn’t considered before.

“This is saying look at all your skill set, think outside of the box and it could be nothing as far as the title you held before, this is something new, go to your skills as opposed to going backwards,” she says. “This is going forward.”

But more than that, she says her involvement in this group, supporting others and finding inspiration from their resilience, is helping her stay optimistic.

“Everything happens for a reason, and there’s a plan that’s higher than myself,” she says. “I’m a big believer that something will come and the next great opportunity is there to be found.”

About 80,000 people work in the bio medical sector in Pennsylvania, with about a quarter specifically in drugs and pharmaceuticals. The state’s labor department tracked some 8,500 jobs lost between 2007 and 2012, including about 3,000 in the Philadelphia region. In New Jersey, the bio pharma and life sciences sector experienced a twelve percent decline between that same period, losing about 13,000 jobs in pharma alone.

“Not all are on the street but many are,” says Anthony Green with Ben Franklin Technology Partners, an area economic development agency focused on mitigating the brain drain and kick-starting local life science initiatives. He estimates anywhere from 4,000 to 6,000 highly skilled workers have been displaced in the region.

The consolidations and downsizing have come in waves, but appeared to have picked up since the mid 2000s, after the development of blockbuster drugs peaked. Companies saw huge returns from widely used patent-protected products (those patents are now running out).

Bill Kinney, an organic chemist for 25 years, was laid off from Johnson and Johnson in 2009.

Kinney, of Bucks County, says his career path since has been a fluid one. He first did consulting, as many do. Business dried up after a year. Finally he said he just had to do something and approached a neighbor who had a landscaping business.

“And he didn’t know I was a PhD chemist; he just thought I was a desperate guy needing a job,” says Kinney. “But it actually was therapeutic to get out there, watering plants, driving around delivering plants for weddings and driving a truck and just working again.”

Today, Kinney has been working to get back to his love of drug discovery and development. He still does consulting, but spends most of his time on the business side at a nonprofit research institute. They’re mining for drugs in a collection of tens of thousands of plant samples donated by Merck.

“I think in current pharmaceutical climate, everyone’s looking to discover a drug quickly, so they have a target of interest; they want in two years a drug that’s going to be in demand. Natural plants take too long.”

The ‘evolution’ of big pharma

Kinney is based out of the Pennsylvania Biotech Center in Doylestown. It’s a simple beige building, quite the opposite of the sheik glass structures sprawled across tree lined college-like campuses that are characteristic of many big pharma sites. It’s in here where Kinney says he’s been able to rebuild that scientific community, one that he and others have longed for since losing their jobs.

“We hear all the time from people who are beign downsized or diplaced,” says Tim Block, a professor at Drexel’s school of medicine, president of this center and the Blumberg Institute. Block has worked with hundreds of people who’d passed through the center over the years, working with them to get back on their feet.

Inside, Kinney says one can find a snapshot of “the evolution” of Pharma, its business model and drug pipeline. It’s in here where research and ideas,  academics, venture capitalists and scientists – many laid off from big pharma – all mix together.

Renold Capocasale is part of that mix.

“It’s easy to make the right decision when you’re up against the wall, you can only go forward,” says Capocasale.

Capocasale started a company when he was on the way out of Johnson and Johnson in 2008, focused on a similar area of biology that he specialized in. He says having the carpet pulled from under him forced him to think differently and be creative.

Capocasale admits to being a poster guy for the growing field of contract research organizations, or CROs. It’s when small and big companies alike turn to him for specific services needed during specific parts of the drug development process.

His lab at Pa Biotech includes an expensive machine, the size of a mini fridge, which runs sophisticated screenings on cell samples. He contracts with big drug companies that don’t want to run those tests in house anymore or with little companies that don’t have the capacity to run them on their own.

“It truly was an opportunity out of what that day seemed like a disaster when I was laid off,” he says, thinking back to when he lost his job six years ago.

Then there’s Marie Loughran. She spends the bulk of her time over a counter, mixing compounds in a nearby lab.

“I’m basically what they call a lab rat,” she says. “I like working in the lab, I like hands on, you know, if I wasn’t a chemist I’d be a cook, so basically chemistry is like cooking but don’t lick the spoon.”

Six months ago Loughran lost her job at Merck, as did most other mid-level chemists in her lab.

Through a professional contact, she met with the head of a company formed by a previously laid off pharma worker. The business does a mix of academic collaborations and its own early research with hopes a big company may one day pick it up. Loughran was hired there earlier this year. She still has many former colleagues who are looking for work, taken a contract position with a larger company or moved elsewhere, to Boston or North Carolina for a job in their field.

“I think I was one of the lucky few,” she says.

Losing a job is not the only factor initially driving people into smaller biotech groups at this center. Take Kunwar Shailubhai, for example.

“I have been in big pharma the last 25 years, and there are many people like me who have ideas but they don’t find [a] home,” says Shailubhai.

Shailubhai voluntarily left a secure job several years ago to develop his own technology. His previous company, Monsanto, wasn’t interested. Sometimes places don’t want to take the financial risk, or a drug isn’t in its strategic plan.

So he started from scratch, courting investors. That was over ten years ago.

“I had three young children at the time,” he says. “Leaving a job without an income source is not easy, but if you believe in what you’ve discovered, what you have done, then you have to go for it,” he says.

The path toward developing a drug is a long, expensive and tedious one, costing big pharma companies upwards of $1.5 billion over the span of more than a decade. In general, the chances of a drug in the clinical phase making it to market is about one in 10 these days (from an idea to market, it’s more like one in 10,000). Shailubhai says thinking about the potential for his drug to help lots of people makes him willing to take that huge risk, but he admits the process has been a stressful one.

Shailubhai, Capocasele and others say every day, people in transition or seeking to move out of big pharma, approach them about possibilities. And while this one space and the smattering of other incubators in the region can only do so much, they hope it can be an example, and help fuel future life science activity.

“Although only a few hundred people here now, we hope it will reseed new ideas, new jobs and new inventions,” says Tim Block.

And if scientists like Shailubhai do discover a promising drug, there appears to be plenty of talented people in this region, like Lisa Coccia, or others in her group, who’d be ready to put it to market.

We told them not to feed Bulogics after midnight…now there’s another spin-off! 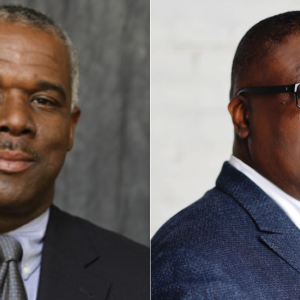