Elizabethtown College said Friday it has received a $500,000 state grant to help in building a $6 million solar energy system.

The college said it intends to install a 2.6-megawatt ground-mounted photovoltaic array on property it owns in Mount Joy Township.

The array would take up about 10 acres of the 33-acre parcel, spokeswoman Elizabeth Harvey said. When it is up and running, E-town expects it to supply about one-fifth of the campus’ energy needs.

E-town said it will partner on the project with Bethlehem-based consulting firm Stone House Group and solar developer Community Energy, based in Radnor.

The project will be financed under a power purchase agreement, a common arrangement in the industry. Community Energy will own the array, and E-town will purchase power at a fixed rate over 20 years.

It would be one of the largest college- or university-affiliated solar projects in the country, Harvey said.

The parcel is adjacent to E-town’s campus and is bounded by Campus, Ridge and Spring roads.

E-town said it has been in contact with the township regarding the project. Assuming there are no hitches in the zoning approval process, E-town hopes to break ground in June 2015 and be finished that autumn, Harvey said.

The array will be a learning tool, offering research opportunities for students and professors, as well as increasing community awareness of alternative energy, E-town said.

The grant was awarded through the Pennsylvania Energy Development Authority, and was one of 28 statewide, totaling $81 million. There were 184 applications submitted.

Marywood University in Scranton received one of the grants, $500,000, which it will put toward a 1-megawatt system, a spokeswoman said. It, too, is being built by Community Energy.

On the other side of the county, Urban Outfitters is installing a 3-megawatt system on the roof of the 1-million square foot e-commerce fulfillment center it is building in Salisbury Township.

The array was underwritten with a $3 million state grant and is expected to supply about half the facility’s power.

Community Energy built what is the county’s largest solar array, a 6-megawatt project in Drumore Township just south of Buck.

It cost more than $20 million and received a $1 million PEDA grant.

At the time of its activation in October 2012, it was the largest array in Pennsylvania, generating enough electricity to power more than 950 homes.

Construction on a 9.1-megawatt project in the Coatesville area in Chester County is expected to start by the end of the year. 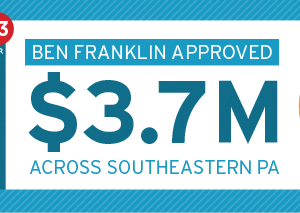