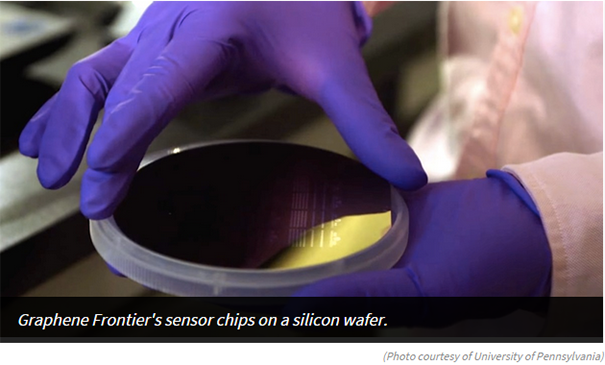 The company is mass producing graphene, a Nobel Prize-winning nanomaterial, in a “gamechanging” fashion.

Graphene Frontiers CEO Mike Patterson says that back in 2010, one square centimeter of graphene could cost tens of thousands of dollars. Now, thanks to his company’s cost-effective manufacturing process, square inches of the carbon-based super material can be produced for just tens of dollars.

While other graphene manufacturers are mixing graphene with rubbers and steel to enhance flexibility and conductivity, respectively, Graphene Frontiers is mass producing large sheets of the material for a purpose that, in Patterson’s words, can be “gamechanging.” In a few years, you could be using graphene every day.

Graphene Frontiers is looking into making flexible displays for phones and televisions. “The ‘you can hit it with a hammer and it wouldn’t break’ kind of thing,” Patterson said. Understandably, that notion has caught the attention of companies like Samsung and LG.

“Something we’re very focused on is using it for electronics,” said Patterson, “Specifically as the key component in chemical and bio-molecule sensors.”

So why should we care about graphene right now?

“It’s the first in a new family of two-dimensional materials that will revolutionize everything we do, from electronics to filtration to any number of industries,” Patterson said, “in much the same way plastics did fifty years ago.”