The race to contain the Ebola virus is getting some new tools in the form of Biomeme’s smartphone-enabled diagnostic.

At DreamIt Health’s demo day in Philadelphia today, Perelman said a few of the devices were being deployed to West Africa to track the disease and could soon be used in Ebola clinics.

The move follows a pilot study of the device by Texas Biomedical Research Institute to identify the Ebola virus in animals.

A few weeks ago I checked in with Biomeme CEO Max Perelman to find out if there were any plans to use its smartphone enabled diagnostic for Ebola. “We’ve been asked that a lot,” Perelman said. Although it seemed like he had a lot more to say, Perelman admitted at that time he couldn’t provide any details at that point.

The public health concerns generated by the escalating number of cases in West Africa has led to innovations on a number of different fronts such as the acceleration of Ebola vaccine development by pharmaceutical companies, the use of telemedicine by healthcare staff to minimize exposure to patients, disinfectants for field hospitals, along with moves by Congress to help speed up regulatory process for reviewing Ebola treatments.

Perelman said the device has had 25 validations this year for biothreats, genomics, and industrial applications. He added that by the end of the third quarter, the company had already outpaced its expectations for the year. It’s also collaborating with another DreamIt Ventures grad– CloudMine. 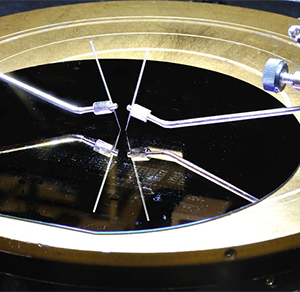 From Borrowing Moms Money To Running A Business. This is Jason Rappaport’s Story.