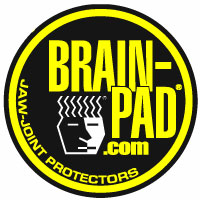 Team sports, particularly football, have been part of the fabric of American life for many years. But any sport involving contact demands a high price from players in the form of head injuries. And recently, the short- and long-term effects of such injuries have been in the news.

Thanks to a Philadelphia-area dental surgeon, Dr. Edward Williams, there is a new way to prevent a common head injury not protected by helmets. He invented a mouth guard, the Brain-Pad Jaw-Joint Protector, that prevents the jaw from being driven into the delicate base of the skull.

Dr. Williams’ original company, WIPSS Products Inc. (Williams Interoral Protective Sports System), founded in 1995, did not survive, but in 2005 that company’s marketing and sales director, Joseph Manzo, started over with Brain-Pad Inc., and has since added 24 patents to Dr. Williams’ original one.

Manzo, a former high-school and college football and baseball player, and a semi-pro baseball pitcher until he dislocated his right shoulder, knows first-hand about the pleasures and dangers of sports. With his products now displayed in every Walmart store and endorsed by several international combat sports associations, Manzo is hoping to enhance the pleasures and reduce the dangers for players everywhere.

What inspired you to start Brain-Pad Inc.?

I owned a distribution center for home-comfort products, sold in major retailers like Hechinger’s, Rickles and Channel, and hundreds of hardware stores. Then Home Depot and Lowe’s came to the area and most of those stores closed up.

A friend of mine in the Conshohocken area told me about the product Dr. Williams had invented, and it interested me. I came down and listened to the doctor’s presentation, and I was amazed that so many brain injuries come from lower-jaw impacts. I wore upper mouth guards throughout my high school and college career, and never knew anything about projection from the bottom jaw up.

Dr. Williams told me the reason he came up with the device was that he had a patient who was a professional boxer, Jesse Ferguson, who told him that every time he got hit on the left side of his jaw, he instantly threw up in the ring.

The doctor x-rayed the jaw joint area and saw that the top of his jawbone had fractured, and a chip was floating nearby. Every time he got hit, the jaw would hit the bone chip and that would hit the vagus nerve, which would trigger vomiting.

The doctor told him to quit boxing, but Ferguson was getting ready for a million-dollar bout. So Dr. Williams built him an upper- and lower-mouth guard that brought the jawbone slightly down and forward, locking it there and creating a safety space. Ferguson had a sparring session with Mike Tyson wearing the appliance, took hits to the jaw and there was no nausea. Ferguson continued his career for 12 more years.

At that point, the doctor applied for a patent (and started his company). I joined him to do marketing and sales.

By 2005, he had left his company, and there had been multiple owners. The CEO left. I started over and named my company Brain-Pad Inc.

How did you get the new company off the ground?

It’s a privately funded company, funded by a mix of people in the Delaware Valley area who knew each other. So we have about 45 shareholders, including myself; I’m a major shareholder.

We had several people on the road doing presentations at schools, booster clubs and football teams. It was a very strenuous procedure, trying to put the information out there.

At that point, most football coaches, when we told them we had something that could reduce the risk of concussions, they’d say, “What concussions? We don’t have any concussions in football.” They’re finding out that the problem is a lot bigger than they thought it was. About 12 kids a year die from these injuries. I think that’s unnecessary. They’re trying to make the rules tougher now.

How has the company grown?

We’re still a relatively small company — we have only six employees, with everyone multi-tasking — but we’re now in all 3,650 Walmart stores, and that has helped us tremendously. We have about 5 million users, and have never had a liability claim against us. We distribute around the world in at least 20 other countries. We also supply theArmy & Airforce Exchange Services on all their bases around the world. They use our devices in their martial arts training.

We also supply a series of retail dealers in the U.S. who have road crews called “team dealers.” They go to all the schools in their area and sell products to sports teams at back-to-school nights and other events. And we sell onAmazon.com.

All of our products are made in Taiwan; we have to do this to stay competitive with other similar products. We do all of our packaging, assembly, warehousing and fulfillment at a facility we contract with in Philadelphia where we occupy about 9,000 square feet.

We’ve recently added another piece of head protection that looks like a regular sweatband, but it contains a gel that can reduce impact forces by about 50 percent, according to our data from SGS Labs. This seems to be gaining acceptance in the soccer world, and in other non-helmeted sports.

What has been the biggest challenge?

Educating people, along with trying to get the people who write standards for products in the U.S. to write them for mouth guards. Kids are mandated to wear mouth guards for certain sports. But the mouth guard is the only piece of protective gear that we mandate kids to wear that doesn’t have a standard.

That’s something I’m working very hard on right now as a member of the headgear committee of ASTM International [American Society for Testing and Materials]. We’re working on a standard for mouth guards that will be presented at the November meeting.

What’s the big differentiator for your company?

Not only does the Brain-Pad stabilize the jaw, it also helps the wearer breathe better by opening the airway 100 percent. It’s similar to an anti-snoring device.

What’s next for Brain-Pad Inc.?

Our company will probably find a strategic partner, with whom our product line makes sense. For example, a helmet company could sell helmets and Brain-Pads as a package and market it as “internal and external protection.”

We recently had meetings with Walmart in Arkansas, and they may be bringing several more of our product lines into their stores. We’re looking to grow with them.