Sen. Bob Casey, a Democrat, and Sen. Pat Toomey, a Republican, celebrated Veterans Day together in Malvern, Chester County, on Tuesday, and both said the federal government needs to help veterans more.

Alluding to the recent scandal at the Department of Veterans Affairs involving long delays in health care for veterans, Toomey said, “We have a profound obligation as a federal government to make sure that we are serving the people who served us. We’ve fallen down on that job in recent years. I think that’s pretty clear.”

Toomey said he thought progress was being made through recent legislation and the restructuring of the VA. VA Secretary Robert McDonald announced an overhaul of the department on Monday.

“All of this effort to help our veterans can’t simply be reliant upon what the VA does,” Casey said. “I’m a great believer in the public sector and the private sector and nonprofit and volunteer efforts being part of the solution.”

After the senators’ speeches, Rajant Corp., a Malvern-based mobile network technology provider, and the Carmen Danella Foundation donated $20,000 to Pennsylvania Wounded Warriors, a nonprofit that gives emergency financial assistance to veterans and their families.

The volunteer organization has distributed more than $500,000 to more than 500 veterans and their families in Pennsylvania so far this year, said Lt. Col. Gordon Weith, a Pennsylvania Wounded Warriors board member.

The money goes toward rent, mortgage, auto expenses, food, gas, and other basic needs. The group relies solely on donations and is not affiliated with any other wounded warriors organizations. 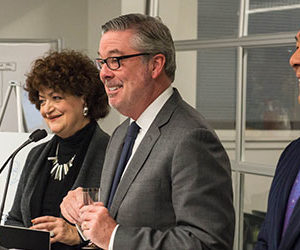