With about 25 seconds to go in Sunday’s Super Bowl and the Seahawks in the red zone, on the television screen, Comcast’s Xfinity Sports Extras app was giving Seattle an 81 percent probability of beating New England. 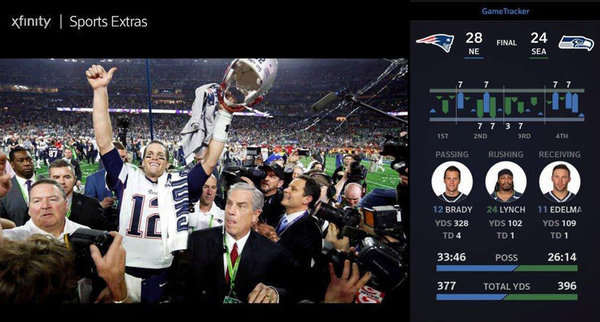 Throughout the game, at dramatic and uneventful moments, even during commercials, Sports Extras fed TV viewers new pie charts, photos, or information graphs every 10 to 20 seconds – facts those TV viewers did not have to find on ESPN or scour Twitter for.

“The sports-viewing experience now requires enhanced content, and if you are not getting it on your TV, you are getting it someplace else,” said Jason Angelides, cofounder of OneTwoSee, the Philadelphia tech company that developed Sports Extras.

For years, Comcast has said it would make television an interactive experience. Finally, that seems to be happening in sports, where distributors and programmers are seeking to make games more entertaining and engaging as they monetize the tens of billions of dollars paid out for TV rights.

The sports app debuted on the Xfinity Comcast cable system in mid-December, in preparation for the Super Bowl. Comcast officials say they could extend it to Major League Baseball games and college football.

In industry jargon, it’s a “lean-back experience,” with data “synchronized” to the televised broadcast. TV viewers lean back in the easy chair, and Comcast delivers sports data to them on the TV.

“We can bring a whole new dimension to the entertainment factor of sports,” said Comcast’s Sam Schwartz, chief business development officer. The Sports Extras app, he said, “supplements the [televised] game with information from the Internet.”

Indeed, Xfinity Sports Extras is only possible because of Comcast’s X1 platform, which merges the cable wire with the Internet. Comcast has installed about five million X1 set-top boxes nationally and intends to install many more. Subscribers with older set-top boxes can’t access Sports Extras.

Angelides, 47, and partner Christopher Reynolds, 40, had the idea of making TV sports more interactive several years ago. They worked for a traffic-mapping company, a subsidiary of the mobile-phone company Nokia in Chester County. The company aggregated real-time traffic data that could then be displayed on local TV news.

They thought: Why not do the same thing aggregating real-time sports information?

Reynolds and Angelides launched OneTwoSee in January 2011, self-funding it for a year and later raising $3.3 million from family, friends, and venture funds.

In spring 2012, Comcast SportsNet Philadelphia agreed to use the OneTwoSee platform to stream baseball information to Phillies fans on mobile phones, tablets, and laptops.

Pleased with fan reception, Comcast-owned NBCUniversal introduced “In-Game Live” – which was how NBCUniversal branded OneTwoSee’s platform – to Chicago, Northern California, and Houston. In addition, Fox Sports and Canadian sports networks have licensed it.

OneTwoSee licenses its technology to these companies for a season, then earns extra revenue based on usage. The company does not disclose its financials, but says its platform is available on more than 15 million set-top boxes or smart TV, and tens of millions of mobile devices.

In the spring, Reynolds and Angelides flew to Comcast’s X1 development office in Silicon Valley to pitch OneTwoSee for Xfinity. Comcast had a real-time sports app, but it was not as sophisticated as OneTwoSee’s.

Throughout the development, OneTwoSee – whose offices are on the 18th floor of a building adjacent to the Comcast Center in Center City – collaborated with Comcast officials here and in Silicon Valley.

On Dec. 11, Sports Extras went live on Xfinity for NFL games. The company now employs 13 and is looking for two software developers; passion for sports is a job requirement, Reynolds said. He estimated that the company has put about 20 person-years into developing the OneTwoSee platform.

“We have never off-shored or near-shored any of our development,” he said. “It takes place right here in Philly.”

WizeHive upgraded to a new Zengine!