Revolutionizing the Manufacture of Medicine and More

Making new drugs, vaccines and gene therapy can take up to a decade or longer, and cost hundreds of millions of dollars or more.

The process is complex and it requires many steps to go from conception to market. And a new platform from ChromaTan, a startup with roots in Happy Valley, is poised to change a significant part of that process, streamlining chromatography and enhancing efficiencies while decreasing costs.

“We have a very unique platform that’s especially relevant nowadays,” notes Oleg Shinkazh, CEO and founder of ChromaTan. “Finally, after all this time, we’re going to be launching our platform to market next year. We had the market launch delayed because of COVID.”

ChromaTan was born in 2010, after Shinkazh witnessed significant problems within biomanufacturing. “There were many cost and processing inefficiencies at the time, and I was lucky enough to come up with an elegant solution,” he says.

Once Shinkazh had that solution, he patented it on his own time and started planning his next steps. But what he discovered was the catch-22 situation that so many entrepreneurs come up against: You need money to generate data and you need data to raise money.

To navigate his way through that catch-22, Shinkazh partnered with Penn State University and the strong relationships he had already established there, including with Andrew Zydney, now Distinguished Professor of Chemical Engineering. Together, the two teamed up and were able to generate critical initial data in Zydney’s lab.

“We then used that data to co-publish and to apply for grants from the National Institutes of Health and, in parallel, I applied for funding from Ben Franklin Technology Partners.

When I got the NIH grant, it was matched by Ben Franklin’s investment and I incubated the company for a while in the State College area,” Shinkazh explains.

With the initial funding secure, Shinkazh hired his first employees. From there, the fledgling startup got to work raising additional funding from investors and other grants. 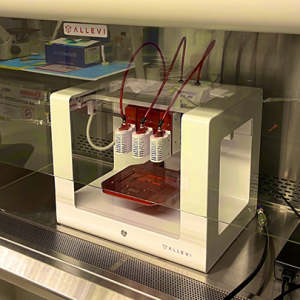