The traditional pregnancy test hasn’t seen any innovation in over 30 years, with the exception of adding a digital component. Lia Diagnostics, launching today at TechCrunch Disrupt Berlin, wants to change that. The Lia pregnancy test will be the first-ever flushable test to hit the market, offering a more sustainable, disposable, convenient and private way for women to find out if they’re pregnant or not.

The company was founded in 2015 by Bethany Edwards and Anna Simpson, following research Edwards had worked on as part of her Master’s at the University of Pennsylvania. She was interested in innovations in material science – specifically, the idea of temporality and creating products that match up to their lifestyle, she says.

A single-use pregnancy test, for example, is made with non-biodegradable materials, so it ends up in landfills if not recycled.

“Single-use diagnostics are only used for a couple of minutes, and they’re all made out of plastic and non-sustainable materials,” explains Edwards.

She wanted to redesign how these products were made and manufactured so the product would biodegrade. The choice to launch with pregnancy tests came about because they hadn’t been updated in decades.

The Lia test offers an alternative to traditional tests, but works in much the same way.

Like other tests, it’s a stick that reacts to urine to determine pregnancy, and it displays results as two lines if pregnant or one line if not, as before. There’s a larger collection area on the test, which makes it easier to use, but the real change is around how the test is made.

Unlike traditional tests, Lia’s tests are made from a special paper that will disperse in water and biodegrade, allowing it to be flushed. That means women won’t have to hide the tests in the trash, take tests in public restrooms, or any of the other things they do in order to have privacy around this often anxiety-producing event – no matter what results they’re hoping for. 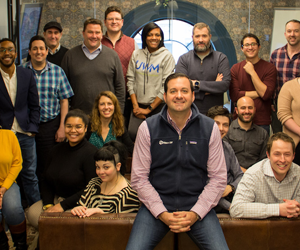