Evan Brandoff and Zubin Teherani are living the dream as two single guys in their mid-20s sharing an apartment in Center City, free of daunting family responsibilities. In other words, they have no kids.

Yet, they work on behalf of them daily as founders of the start-up LeagueSide. Written atop the white board in the conference room of their Benjamin’s Desk coworking space off Washington Square is this mission statement: “To make youth sports more accessible.”

Their method is to help money-squeezed sports organizations reach beyond the traditional sources of funds for uniforms, equipment, field rentals, and referees — mom-and-pop pizza shops, local hardware stores, and, of course, players’ parents — to land sponsorships from regional and national brands such as Chipotle, Smoothie King, Verizon, and Einstein Healthcare Network.

“We want to give every single child the opportunity in the United States to be able to play organized sports,” said Brandoff, 25, LeagueSide’s chief executive.

Since being launched in 2015, LeagueSide will have helped secure about $2 million in funding for 600 leagues in 16 states by year’s end, Brandoff said. Half of that funding will have been secured just this year, he said. He declined to disclose the firm’s take.

While its millennial staff of 12 is expected to expand to 20 by year’s end, it still wouldn’t be big enough for LeagueSide to realize its goal of opening regional offices. So LeagueSide soon plans a Series A fund-raising round of $3 million to $5 million. Last year, it raised $750,000 from investors, including Ben Franklin Technology Partners, cigar entrepreneur Marvin Samel, and former NFL safety Ronnie Lott.

“What is so exciting as we grow,” said Teherani, 26, LeagueSide’s chief operating officer, “is not only is this a scalable company that is worth a lot of money. Simultaneously we’re giving back money to communities.”

LeagueSide is a finalist in the second annual Stellar StartUps competition held by Philadelphia Media Network, the parent company of the Inquirer, Daily News, and Philly.com. It is competing in the products/services category. 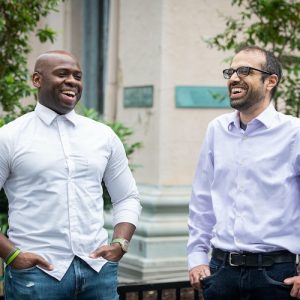