With Twitter’s announcement last week it will soon raise its character limit per tweet from 140 to 10,000, at least one Philadelphia company will be forced to adapt.

PeopleLinx markets a social selling platform that enables salespeople to better engage with potential customers on social media. While PeopleLinx emphasizes LinkedIn as the most useful website for sales, CEO Kevin O’Neill acknowledges a rising activity among prospective customers in Twitter.

He expects that trend to gain ground with Twitter’s increase to a 10,000 character limit.

“I think it’s a great change,” O’Neill said. “The idea of every sales person having their own webpage has not existed, because there are so many constraints. Twitter will provide that.”

Ten thousand characters can turn each tweet into something more resembling a blog post, giving sellers more than ample space to make a pitch. With 40-50 percent of PeopleLinx’s clients active on Twitter, the website could establish some traction among the business community.

A 10,000 character limit is a big risk for a company whose shares has fallen significantly over the last year, trading as high as $52 in April but as low as $22 in December. Jack Dorsey became CEO for the second time last year, simultaneously serving as CEO of the fin-tech unicorn Square.

In his announcement of the 10,000 character limit, Dorsey reminisced: “[The 140 character limit] has become a beautiful constraint, and I love it! It inspires creativity and brevity. And a sense of speed. We will never lose that feeling.”

Whatever O’Neill thinks about Twitter’s business strategy and how that may affect its majority membership of individuals, he welcomes the versatility it will soon give brands.

“They have to do something there to respond to Wall Street’s needs,” O’Neill said. “In our business, Twitter has always been a little bit of an unknown.”

O’Neill is also keeping a close eye on a new Facebook product that could disrupt the market soon. Facebook at Work, he said, could compete with Salesforce, Yammer and Microsoft for top dog in workplace organization and communication.

Facebook is one of the companies with which O’Neill has a conversation a few times a year, so PeopleLinx can try and stay ahead of market. A strong launch for Facebook at Work would likely create bigger ripples than Twitter’s experiments in tweet length. 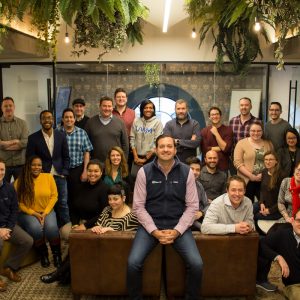